Sims-like game of a shoe salesperson described in the tutorial

The purpose of this tutorial is to help you create a Sims-style simulation of a shoe salesperson's day at work. You will need to define the salesperson's hierarchy of needs based on research and collaboration.

The finished simulation can be found in the Scalable Game Design Arcade here.

The document created in order to properly plan for the creation of this simulation is located here.

How to Read This Tutorial

New Project: First, you should open a new project and give it a relevant name.  For this simulation, the project was named "Shoe Salesperson."  This tutorial was also created using 32 x 32 sized agents.

Agents: This project will require 7 agents to be created with some having multiple depictions.  These are shown below.

Worksheet:  The worksheet created for this simulation is shown below.  There are two rooms, one at the storefront where the customers will be, and a back room for storing inventory.

Programming diffusion for spreading the presence of targets

Below is an image of how the diffusion may look when a Customer arrives to the store. Please note that this is just a visualization technique to show diffusion values, but the user will not see this while the simulation is running. 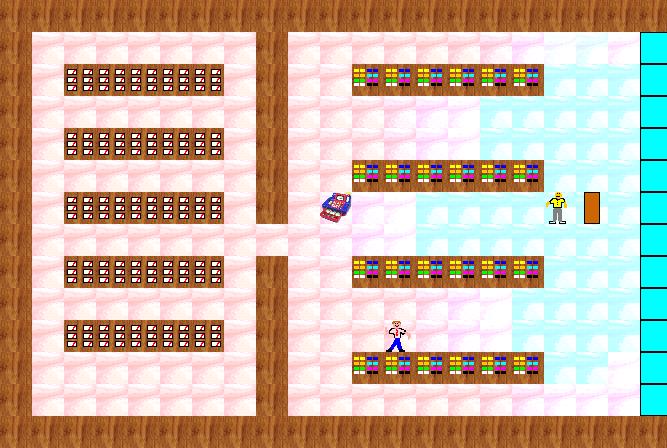 Here is the code necessary for each agent that will need to be located. This is the only code that will be located in the "While running" behavior of the agents.

The code to diffuse these "presence" values of the various target agents will be placed in the floor agents. The simple form of diffusing one such value is essentially the average of the values from the four neighbors:

All of the code for this will be located within the behavior of the Salesperson, but the only code that will be in the "While running" portion of the behavior will be the checking of time, moving, and completing a task. This code is shown below.

Here, the Salesperson first calls updateHierarchy, which is a method that increments the counters for tasks that will need to be completed after a certain period of time. These include cleaning the store and doing inventory.

The third method the Salesperson calls will be the satisfyHierarchy method.  This method will have the Salesperson work on completing a task if it has been reached.  This may include just cleaning wherever the Salesperson is standing, doing inventory, helping a Customer, or getting shoes from the Register if the Customer wants shoes.

There are many methods that the Salesperson needs in order to serve a Customer.  Most of these involve properly simulating communication between the Bench/Customer Generator, the Customer, and the Register.

The first of these is the method that the Bench/Customer Generator broadcasts to the the Salesperson to tell it to make serving the Customer a priority. This can be done by having the method set the customer variable to 1. Basically, this would be the same as hearing a door beep when a Customer enters which triggers the Salesperson's need to help them.

Another necessary method tells the Salesperson that the Customer is leaving. For this to have meaning to the Salesperson agent, a method must set the customer variable to 0.

A third communication method that is used has the Salesperson handle a request by the Customer to buy shoes.

The final method used where other agents are communicating with the Salesperson is the holdShoebox method. This method simply changes the depiction of the Salesperson to holding a shoebox and lets other rules handle the Salesperson's movement back to the customer.

The cleaning method, like the inventory method, also doesn't require any communication to occur with the Salesperson agent.  So it is very similar in that it changes depiction, keeps track of how long cleaning has been done, stops cleaning after 10 seconds, and then resets the counter for the next time cleaning needs to be completed.

The code for each method checks which direction the values of either c, i, or r (depending on the task needed to be completed) of the floor is the strongest and then moves in that direction.  The general pseudo-code for this is as follows:

Portions of this code are shown below for each method: toCustomer, toRegister, and toInventory.

Note: The variables used here were set in the while running method for each agent.

The purpose of the Bench agent is to randomly generate a Customer agent every 20 seconds with 50% probability.  This agent also broadcasts to the Salesperson that a Customer has been generated, just like a bell going off at the door to the store.

Besides the while running method that sets the c variable and allows for the Salesperson to hill climb towards the Customer, there is a method that the has the customer respond to help and a method to respond to having shoes sold to them.  Examples of each with pseudo-code can be seen below.

The register only has one method besides the while running that sets the variable used for hill climbing.  This method is the sale method and it tells the Salesperson to hold a shoebox and return to the Customer to give it to them.  Examples of the methods are shown below.