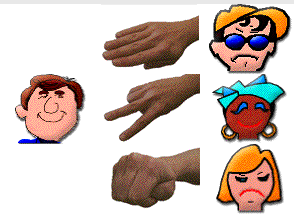 Rock, Paper, Scissors was a series of ePOWs designed to encourage students to explore probability. In this problem series, students investigate the concept of probability through an investigation of the fairness of games.

The Rock, Paper, Scissors game can be used to explore some concepts of probability. For those not familiar with Rock, Paper, Scissors, it is a choosing game in which two or more people make throws with their hands. The throws resemble the shapes of a rock, scissors and paper. The game is scored as follows: Rock smashes Scissors (rock wins); Paper covers Rock (paper wins); Scissors cuts paper (scissors wins). If both players make the same throw, it is a tie.

In this activity you will observe a simulation of the Rock, Paper, Scissors game and tell us what you think about its fairness. In the simulation there are two players, Ed and Vicky. The scorekeeper, Mr. Garrison, is watching over the game. The game is played 100 times. The throws for each player are generated randomly. There is a graph next to the simulation that helps us think about Ed's winning percentage. It plots, over the course of the throws, the ratio of Ed's wins to the total number of wins, ignoring ties for now. The vertical (up) axis represents this ratio and it goes from a value of 0, where Ed isn't winning any, to 1, where Ed is winning all.

In this activity students run a simulation of two player Rock, Paper, Scissors where one player generates throws randomly, while the other one only throws a Rock for every trial. How do you think this will affect the outcome? There is a graph that will show the probability of each player winning.

Students play with the three-player game of Rock, Paper, Scissors from Activity 3 and try to assign point values to each of the rules above to make it a fair game.

Rock, Paper, Scissors takes advatage of the computer's ability to rapidly iterate a problem , helping students visualize probability over large sets of data. Graphs facilitate identification of trends as students experiment with problem variations between random throws and set throws in an even game; in part two they extend their developing understanding to more complex problems, including multiple players operating within varying "win" scenarios.