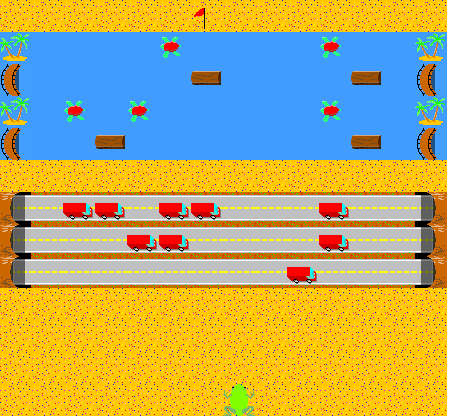 Our aim is to create the frogger game depicted at the top of this page. In the first part of the Tutorial we started creating Frogger. We Created the following Agents and Behaviors

What Do We Need To Add?

Compare the above picture to our current game--> what do we need to add to our game?

The Above Picture has the following agents

Agent: Frog :We must update the Frog Agent

Create the River Agent: The River Agent will have no behaviors of its own-- it will just be a depiction. Other agents, like the Log and Turtles, will invoke the River for their own behaviors.

In the above rule you can see that if the frog is directly above the river, the simulation resets and the frog gets erased. To let the player know that the frog is drowning you can add another depiction (similar to "squished frog"); however, in this example, we use the "Speech Action" (denoted by the mouth) that allows us to type in a phrase to be spoken by the computer (on windows machines the might not be heard but the text of the message is put on the bottom of the screen). We have the speech action speak the words "I cannot swim"-- this notifies the user that the frog should not jump in the water.

Create the Log Maker Agent: This Agent will create and delete the logs ( exactly similar to the Tunnel Agent we made in Frogger Tutorial Part 1 that created and deleted trucks ). Just create a Depiction for right now; in our example, we use a bridge.

Create the Log Agent : Again you can use the above picture (or the picture to the right) as a guide. Don't worry about the Log behaviors right now-- We will do the behaviors after we do the Log Maker behaviors

Notice that every .6 seconds there is a 50% chance of a log being created. This is to make the game challenging-- if logs were always created then there would be less of a challenge for the frog to cross the river.

Create Behaviors for the Log Agent: The Log Agent Moves from left to right. Therefore the Log Agent needs to move right when there is water to the right of it and erase itself when there is a Log Maker to the right of it. However, the log must also Transport the frog if the frog is on top of the log. So instead of using the move action, we use the transport action-- which works like move, except if there is an agent on top of the log, it 'comes along for the ride'. So the Log has to have the following behavior: 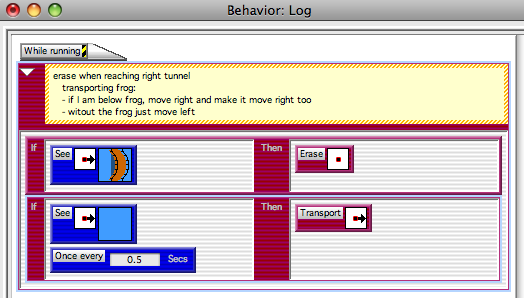 Please note that with the above behavior, the Log agent can transport anything that lands on top of it, not only Frogs, so if you want a Log that is discriminating about what it transports, you need to specify that.

.Create the Turtle Maker Agent: This Agent will create and delete the turtles (similar to the Log Maker Agent we Just created). Just do the Depiction, in the above example we use palm trees on a sand island The Turtle and Turtle Maker works Exactly like the Log and Log Maker with the difference that the Turtles move Right to Left (as opposed to the Logs that moved Left to Right). So the Turtle Maker should create new Turtles to the Left.

We will do the behaviors below

Create the Turtle Agent: Again you can use the picture to the side as a guide.

We will now program the Behaviors for the Turtle Maker Agent and the Turtle Agent.

Behaviors for the Turtle Maker Agent

What behaviors do we need to program for the Turtle Maker Agent and the Turtle Agent?

This rule is simple, Basically the Turtle Maker Agent Makes a Turtle to the Left every so often if there is River to the Left.

Behaviors for the Turtle Agent 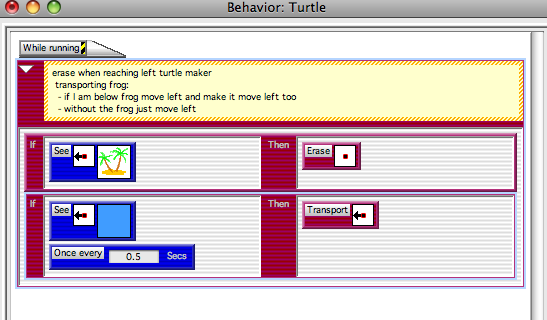 Fill out the level If you haven't already, you can place an alternating rows of Log Makers and Frog Makers on the sides of the river (if you need a guide use the picture at the top of this tutorial). Once you're satisfied with the way your level looks, it's time to create the win state!

The Final Thing we need to program is a win state. At the very top of the Level is a flag we refer to as "the Grotto" or the Frog's home. If the user is able to get the frog across the Road, and across the river the user will reach the Grotto and some sort of victory message will be shown (like "YOU WIN!" or something to that effect). To do this we first make the Grotto Agent; and then we put a final rule in the Frog Agent such that if a Frog is above the Grotto, some sort of victory message is played.

Make the Grotto and Place it on top of the Screen Use the top picture as a guide as to where to place the Grotto Agent. The Grotto will have no behaviors, just a depiction.

Now, if the Frogger is over the Grotto, we need to have a victory message. We do this by adding the following behavior to the Frog.

So if the Frog is over the Grotto, We play a victory message, and since the game is over, we stop the simulation.