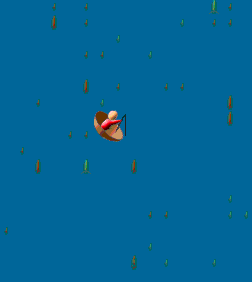 Fish Farm II extends the concepts of ratio and equivalent ratio to a situation in which the ratio of male to female fish in a large lake is unknown. Students can explore the ratio of male to female fish in the lake by "scooping" one fish at a time from the lake and then returning the unmarked fish to the lake before doing another "scoop." They can choose to do as many trial "scoops" as they wish to make a justifiable estimate of the male-to-female ratio in the lake. As students run many trial "scoops," the data will be updated in a table and a pie graph.

Students are challenged to figure out, based on their scooping data, which ratio from the Fish Farm 1 ponds (1:1, 3:1, or 2:1) most closely matches the lake's ratio of male to female fish. The number of repeated trials that a student runs should affect the reasonableness of his or her estimate. Students should note that the ratio of male to female fish is unstable with a small number of trials, and tends toward a more stable ratio with a large number of trials.

The day after their birthday, the Carp triplets visit Lake Mark Park. Seeing some fish swimming in the lake, Angel scoops one out with a small net, then throws it back. It's a male

. Angel then scoops out and throws back another fish, this time a female

Excitedly, Angel says, "I think this lake has equal numbers of male and female fish, just like my pond at home!" (See Fish Farm I.)

Molly and Gar wonder whether the ratio of fish in the lake might be closer to the ratios in their own backyard ponds. (Recall that Molly's pond contains three times as many males as females, and Gar's pond has twice as many females as males. The triplets think they will need to do more "scooping" before reaching a conclusion about the lake's male-to-female fish ratio.

The pre-activity is designed to introduce students to sampling with replacement, the difficulty of making predictions based on small samples, and how to convert data to percentages and represent those percentages in a pie graph. Two different ideas are listed as possible post-activities.

Discuss the appearance of the pie graphs and the associated percentages. Justify why the pie graph is an accurate representation of the three ratios.

Before students use the java applet to solve the Fish Farm II problem, have them read and act out the triplets' visit to the lake to reinforce the "scoop" sampling procedure used in the applet.