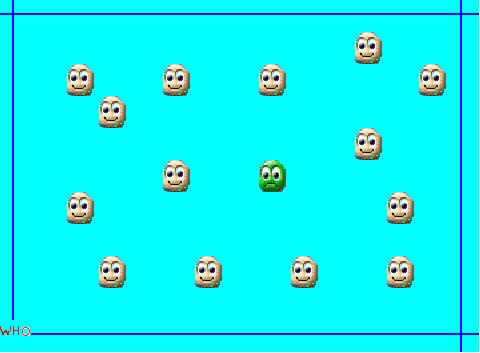 Creating the Simulation: Getting Started

If this is your first time using Agentsheets, please follow the links to commonly used tools.

Make a New Project: The first thing to do is to create a new project and give it a meaningful name, such as "Contagion", which is the name of the example simulation associated with this tutorial. When creating a new project, the default 32 pixel x 32 pixel agent size is generally a good starting point. Smaller agent sizes are useful if you are creating a project with more "atomic" kinds of agents, such as simulating the accretion of dust particles. The more complex the features you want to be visible in the simulation, the larger the agent size needed.

Creating Agents: Create agents for your simulation. In general, every object in the simulation, including the background, is an agent. This includes boundaries (e.g., walls). In addition, some agents may have multiple depictions to indicate changes in agent status (e.g., well person, sick person).

Here are the agent depctions used in the infections disease simulation tutorial:

NOTE: The depictions of the "well", "sick", and "dead" person are multiple depictions of THE SAME "Person" AGENT. After creating the "Person" agent, use the "New Depiction" button in the gallery to the remaining depictions.

Simulation Properties for Controlling a Simulation

Simulation properties will be used to simulate disease variables, such as the infectiousness of a disease and the immune response of a person. These variables will be referenced later in the implementation details of the tutorial; however, it will be helpful to define them at this point, so that you can test your implementation incrementally.

Here is the list of simulation properties to create, with suggested starting values: 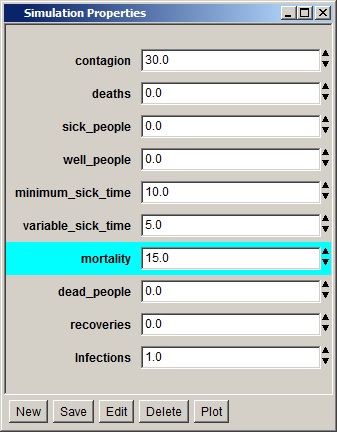 Basically, the simulation has the following steps and general flow:

Programming the Behavior of the 'Person' Agent

Overview: Most of the "action" in this simulation is controlled and performed within the "person" agent's behavior. Extensive use is made of "methods", which are like subroutines in a conventional procedural programming language. This divides the actions of the behavior into smaller, more manageable blocks of rules. The "while running" block is the only block of rules in an agent's behavior that is executed continuously, in a polling nature. All other methods are executed only when specifically invoked, either from within the "while running" block or another method in the same or another agent's behavior, much like subroutines within a procedural programming language.

Follow along in the simulation: In order to understand this tutorial, it is best to download the companion project (see the link at the bottom of this tutorial), and open it in AgentSheets. Examine the behavior of the various agents, the simulation properties window, and the agent attributes window.

Recovering (or not) from the infection: Once a person agent becomes infected, it continues to move around the worksheet until he/she either recovers or dies. In the latter case, the person agent depiction changes to the "dead_person" depiction and no longer moves around the worksheet. However, it remains only briefly on the worksheet; otherwise, it would become a barrier to movement of other agents. In order to actually see the appearance of a dead person, one must move the simulation run-time slider bar far to the left.

The rest of the story ...: This completes the discussion of the main elements of the "Contagion" infections disease simulation tutorial and sample simulation. It is important to note that this sample simulation is only a beginning, especially in trying to model the spread of an actual contagion. There are hundreds or more variables involved in such a simulation and millions of "agents" that would be simulated. It is obviously both a complex problem and a vital one to address in increasingly communicating world population. The page on "Contagion_Design" gives a short partial list of possible extensions to this simulation to begin to address some of this complexity.