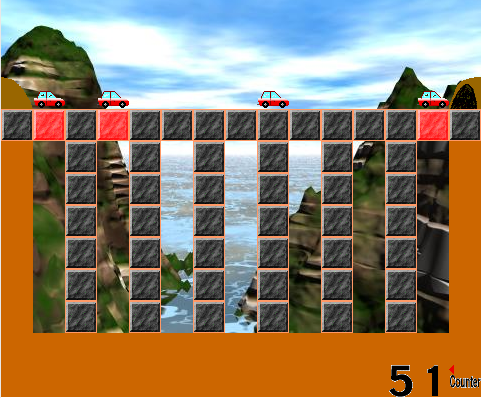 Build your own bridge and experience forces. Remove as many bricks as you can to reduce the cost of the bridge but in case of instability your bridge will collapse under the load of cars driving over it. Computing the forces in all the bricks the bridge provides you with feedback (some call it "critique" of your bridge design) by colorizing bricks indicating structural tension.

The best bridge is the one that uses the minimal number of bricks. How many does it take? Hint, you will need to have some bricks under tension (glowing red) to build the best bridge. Try out different designs:

In order to succeed in building the best or at least a pretty good bridge the user has to make a big conceptual shift that took human kind many years. The simulation supports this because unlike a physical artifact it visibly illustrates mechanical forces. This kind of computational feedback/critique, after some time, encourages to abandon their first design. Most people playing with this simulation start with removing vertical slices. This leads to a good but not optimal design. In essence this is a Greek bridge design. Optimal bridges require some kind of arch design. This is what the Romans learned. In this Greek to Roman design context this simulation could be linked to a number of educational issues including: architecture, physics, design, history, geometry, algebra, calculus, etc. Ideally these links would be captured in a medium such as the Web allowing the learner to follow some of these dimensions. Educational tidbits. One thing we learned with this simulation is that constructionism can be more effective when used in some DEconstrutivist context. Learning about something by building things from scratch can be extremely powerful but also frustrating to the point where learners give up. In the case of the bridge builder people seem to be learning just as much if not more by REMOVING elements of a design. Combined with the "force" feedback most of the users we observed eventually migrated to arch designs. This process could be aided with some instructionist tools.